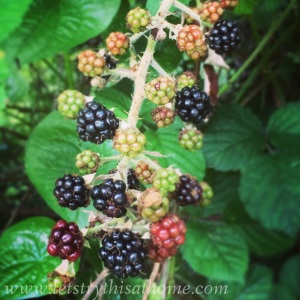 I love this time of year when it’s still summer, but the early mornings hint at the changing season to come, with a chill in the air and wisps of mist clinging to the fields and woods in the valley below our house.

It seems early this year, but the trees and hedgerows near us are starting to reveal their autumn goodies, with cob nuts everywhere and ripe blackberries on show already.  So, we took ourselves off blackberry picking, joined by Bird Girl and Chief Stick Collector’s cousins and my sister.

As luck would have it, blackberry picking is another thing on our list of 50 Things to do before 11 3/4. So we were hoping to be able to tick off another challenge, which sounded like it would be an easy and risk-free one to complete!

We did have to be careful to avoid stinging nettles and blackberry thorns, so it wasn’t entirely without an element of danger (as far as that term is understood by preschoolers!).  But it didn’t take us long to pick enough to take home. And then we had to come up with an appropriately seasonal recipe.

We decided to turn them into Blackberry Cookies.  I didn’t have a recipe, so adapted a recipe I had found for Cherry and Sultana Oaty Cookies.  I thought the blackberries were a bit of a no-brainer as far as improvements go – who likes glace cherries anyway? 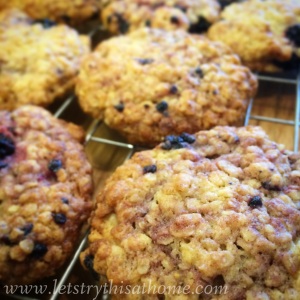 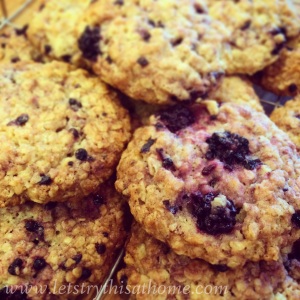 These are more of a chewy cookie than a crunchy one, but they last a good few days sealed in an airtight tin.   I also think they would taste really good crumbled over vanilla ice cream, but ours didn’t hang around long enough to find out!
I have linked this recipe up to #recipeoftheweek – why not pop over there and check out some of the other tempting recipes? – Just click on the badge below 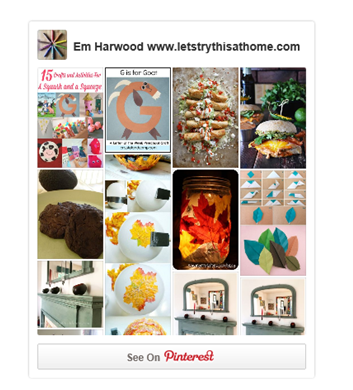