Friday was one of those beautiful autumn days where it’s sunny and still warm enough to be outside in t-shirts.  Bird Girl and I made the most of the fabulous weather to spend some time in the park after pre-school before we had to go and collect Chief Stick Collector from school.  Our local playground is surrounded by huge mature oak, plane, sycamore and horse chestnut trees. The horse chestnuts, who seem to get their leaves first in spring are all looking a bit tired, brown and droopy already; whereas the oaks, who are late with their leaves, are still wearing their summer foliage proudly.  But the plane trees are offering some spectacular autumn foliage, and the grass in the playground was carpeted in a blanket of reds, oranges, and yellows from the fallen leaves.

After some time on the play equipment, we decided to collect some leaves, but one quickly led to another, to another, and soon we had armfuls of foliage.

But what to do with them all?

During some after-school quiet time, I put my thinking cap on.  We definitely weren’t lacking in options: a quick look at my rapidly-filling Pinterest board of autumn craft ideas provided lots of inspiration for leaf-themed projects. But on this occasion I wanted something quick and easy, that could be fitted in before dinnertime, and that didn’t call for lots of equipment or mean creating lots of mess.  I liked the idea of an autumnal garland or wreath, and decided to see if I could cobble something together.

And strangely, it was winter, rather than autumn, that gave me an idea for what to do.  Bird Girl’s current favourite movie is Frozen.  If you have young children, I’ll bet that you are familiar with it.  More precisely, it was the elaborately braided hair of the main characters that got me thinking…

I started with three leaves and began plaiting their stalks together. The idea was to try to weave in additional leaves as I went along, using the same technique as you would use to french-plait or braid hair.  As I crossed each stalk across, I added a further leaf, like this:

I continued doing this, adding an additional leaf with every few crosses of the stalks.  The stalks of the earlier leaves eventually get too short to continue, but I found you can just leave them out when they are too short to include.  If you keep going, you end up with something like the picture below.  You can see the ends of stalks poking out, but it doesn’t matter, because this is the reverse side: 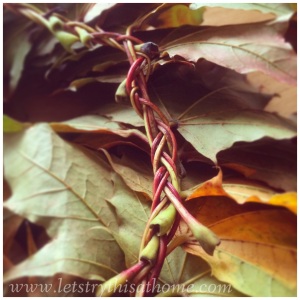 I continued until all our leaves were incorporated, and I had a long chain of leaves.  I considered leaving it like this as a leaf garland, but couldn’t find a suitable place to put it, so decided to see if it could be used as a wreath. It was surprisingly easy! I just bent it round to form a rough circle, and secured the two ends with some twine.  From the back, it looked like this:

So far so good, but would it look ok from the front? Flip it over and see!

Now all that remained was to put it on the front door.

Who says front door wreaths are just for Christmas?! 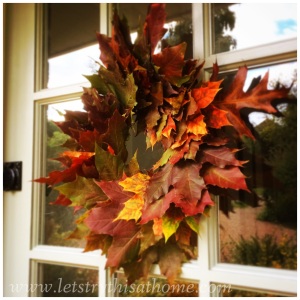 I was quite pleased with how this turned out, but I think there could be a few improvements. This won’t last very long, because the leaves will droop after a few days, so it might be better with pressed leaves (although that would be a bit more fragile, and would mean waiting a good few weeks after gathering the leaves, not good if you’re impatient like me!). It would probably hold its shape better with a length of flower-arranging wire woven in with the leaf stalks to give it a bit more rigidity.  But in the end, this was about speed and simplicity, and as it only takes 10 – 15 minutes to make, I don’t mind so much if it starts looking a bit tired and droopy in a few days’ time, it’s no bother to rustle up a new one.  Bird Girl and Chief Stick Collector will, I’m sure, be happy to have an excuse to collect more leaves!